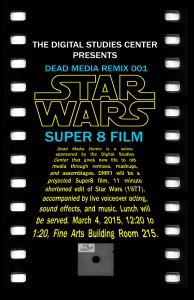 Dead Media Remix is a series that gives new life to old media through remixes, mash-ups, and assemblages. DMR001 will be a projected Super8 film excerpt of Star Wars (1977), accompanied by live voiceover acting and sound effects. March 4, 2015, Free Period in the ModLab (FA215). Lunch will be served.

“Star Wars was released theatrically in the United States on May 25, 1977 in fewer than 32 theaters. It earned $461 million in the United States and $314 million overseas, totaling $775 million. It surpassed Jaws (1975) to become the highest-grossing film until E.T. the Extra-Terrestrial in 1983.

Star Wars debuted on Betamax, LaserDisc, Video 2000, and VHS between the 1980s and 1990s by CBS/Fox Video. The final issue of the original theatrical release (pre-Special Edition) to VHS format occurred in 1995, as part of “Last Chance to Own the Original” campaign, available as part of a trilogy set and as a standalone purchase.” — Wikipedia